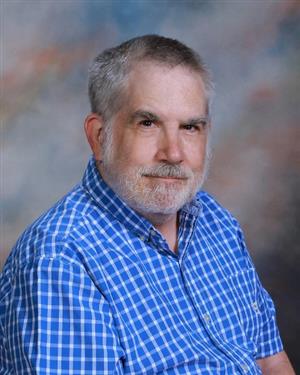 Thomas Thompson is in his 6th year of teaching high school science at Sherrard. He teaches Chemistry and Physics courses and is the Science Department Instructional Leader: NHS Adviser and STEM Coach. He has a B.S. - Dual Major in Chemistry and Biology (Regis College:1983): M.A.T. Biology: Bioethics (Marycrest International University:2001).

He said he applied at Sherrard when he was looking for a chemistry teaching position because he, "Knew of Sherrard's reputation as having a strong science department. I was fortunate to have been selected for that position and I am happy to be a Sherrard Tiger!"

Thompson's hometown is Davenport, Iowa. His family is spread out over Eastern Iowa and Western Illinois. He recently lost his 14 year old cat to cancer, "She was last in a line of three cats named after strong, female scientists over the past 14 years." He plans to become a "Cat dad" again, "I'd be a Dog Dad too but with my schedule it's not fair to the dog. Cats, on the other hand, can take care of themselves," he said.

Tom's favorites include:
Animal: Waldo: a very large spider that made its home in the science department. He's the department pet and legend in his own mind.
Fav Color: Blue
Fav Food: Steak and Lobster
Fav Book: The Martian Chronicles by Ray Bradbury - who is my  favorite author of science fiction.
Fav Movie: "Once Upon a Time in the West. A classic collaboration between director Sergio Leone and film composer Ennio Morricone. There are scenes in that film that I have watched a thousand times and I still think that I pick up something new each time I watch them.
Fav vacation place: Colorado in general. I consider it my second home as I earned my undergraduate degree in the state.

"What's the difference between a movie and a film? It's the music, the film score. I collect film music. Presently, the best in the business is Hans Zimmer but not even he holds a candle to late great maestro: Ennio Morricone," said Thompson.

For him, Interacting with students and keeping things fresh is important,  "I like to have fun, bring some humor into the classroom. I also challenge myself to make the subject matter interesting for me. I usually never teach a lesson quite the same way from year to year. If I did, I would quickly get bored and the students would pick up on it.

Thompson began teaching high school science in his 40's. His first career was as an analyst/editor. He spent 13 years at Chemical Abstracts Service in Columbus, Ohio. "It is known in the scientific community as 'The Little United Nations'. I had the privilege to work with fellow chemists from around the world as we processed chemical information from research articles, books, and patents into online databases used by governments and academia," he said.

His best advice for life is, "Given my experience with different cultures, ethnicities, and belief systems while at Chemical Abstracts Service, my advice is best summed up by a quote attributed to author Steven Covey, whom I studied in graduate school: 'Strength lies in differences, not in similarities'".