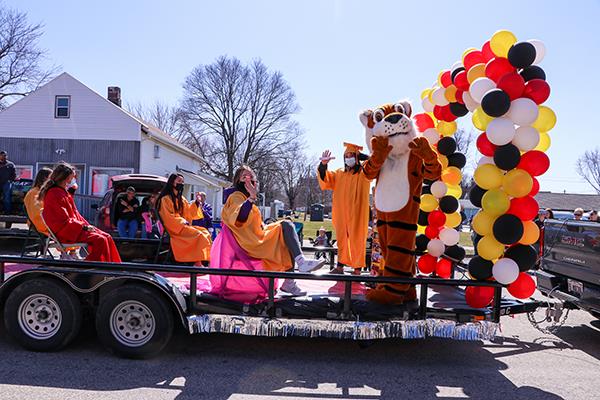 Grad Float: A float featured in the parade shows seniors ready for graduation, along with the district's Tiger mascot.

The weather was sunny with a high of 64 degrees, not a cloud in the sky - a perfect compliment to the much-anticipated community event, the Sherrard School District homecoming parade, held last Saturday, March 20. Traditionally, the parade is held in the fall prior to a home football game and in conjunction with a homecoming dance, but due to pandemic guidelines the parade had to be held during the spring, and creative ideas took hold to replace the dance.

Organizer and high school special education teacher Vanessa Schulenberg said festivities went well, “I’m really happy with how the parade turned out - it was great to see the community come out and support the students. The energy was impressive! The kids were so grateful to be there that they were happy to follow guidelines.”

She said part of the reason for delaying the parade - that had once been rescheduled for winter, was to carefully make modifications, “To make it work and follow social distancing guidelines.”

"The decision to hold a Homecoming parade was made to give the students an opportunity to have some normalcy with school activities. Knowing we could not have a dance, we wanted to provide some of the traditional homecoming activities, which culminated with our parade," said High School Principal Tim Wernentin.

He said the atmosphere was celebratory and the school felt the much-needed community support, "Being outside helped address the required mitigations still in place and provided a well-deserved mental health pick-me-up for students and community members."

Sherrard Fire Protection District fire trucks led the way with sirens wailing throughout the traditional parade route, starting at the ball diamond on the west end of town and moving east on 1st st. four blocks, and right at 2nd ave., then right on 3rd street through Sherrard’s downtown four blocks.

“This is great. I really enjoy it, it’s an honor to be here,” said Lawson.

He played on the undefeated Lumberjacks team in 1948 - helping win the title “Corn Belt Conference Champs”.

“That’s a time I remember, way back when,” He said he played every sport available during his high school career and since has attended a vast number of games supporting his children, grandchildren and now great-grandchildren at Sherrard schools.

The entire district got involved with spirit week leading up to the homecoming parade, the junior high had dress up days with winners each day, Matherville Intermediate, Sherrard Elementary and Winola Elementary had dress up days - as well as special activities - all carefully planned to follow masking and social distancing guidelines.

The theme for the week was, “High School Musical”. A virtual all-school assembly was held Friday before the parade and was broadcast into every classroom. Each high school class prepared a dance ahead of time - vying for the award of ‘best of classes’.

The school band, cheerleaders and judges were live on camera, following COVID measures in the gym between pre-recorded class dance videos. Because only a limited number of people could be in the gym at one time - Sherrard TV students ran the segments, switching between the in-person camera and pre-recorded videos viewable by all students via their Chromebook.

During the week, two Matherville Intermediate students, earned the title, “Matherville’s Most Spirited” and proudly waved through the parade, Olivia Jordan and Lincoln Campbell. Winola Elementary and Sherrard Elementary teachers chose kindergarten “Crownbearers”, Ahna Terronez - Krohn for Sherrard Grade, and  Alex Hitchcock for Winola. They also got to ride and wave during the parade.

The consequences of the pandemic are far-reaching, one aftereffect is certain to be that school students, teachers, and staff won’t soon take for granted these types of morale boosting community events.

“The community has always been great in the support they give - and with games not open to all people, this was important for all to safely come together again,” said activities Director Michael Applegate.

Tickets for indoor sporting events have been limited to home game audiences only, with a capacity limit set by IHSA. Games are streamed by the NFHS Network online for patrons who can’t attend in-person.