Earlier this year, Carlson donated $50,000 specifically to fund the Academic Achievement Awards that lost financial backing several years ago. Previously, the Milan Chamber of Commerce provided financial support for scholarships. Twenty-five thousand went toward this year, and the other 25 will fund the scholarships for 2023.

Because of the donation, nine students chosen by seven departments received scholarships for their outstanding academic achievement.

Principal Tim Wernentin said it’s still undecided how the rest of the money will be spent. They’re currently looking into the purchase of a new scoreboard for the high school gymnasium.

He believes that public schools like Sherrard are at the forefront of shaping tomorrow’s leaders and that graduates should consider giving back to the organizations that have made them successful.

Mr. Carlson is grateful for the opportunity to continue funding scholarship programs and special priority requests for your organization.”

Mr. Carlson’s philanthropic efforts have facilitated over $1,000,000 in donations to dozens of charitable causes via the Carlson Family Trust. His giving priorities include education, healthcare access, and animal welfare, with particular interest in funding exotic cat species survival breeding programs.  Mr. Carlson is the proud benefactor behind one of America’s largest Amur Leopard breeding programs.

A native of Illinois, Mr. Carlson now resides in Las Vegas and Mexico. He enjoys travel, golf, and financial speculation. An avid parachutist, Mr. Carlson is a partner in one of Southern California’s largest skydiving facilities. 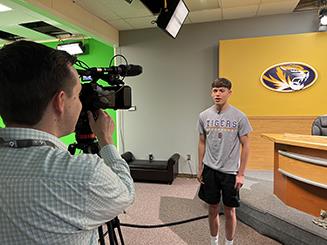 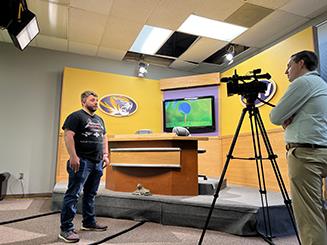 Seniors Terryn Krup and Brenin Krack were interviewed for a segment on KWQC News Channel 6 for a story on the donation that helped fund STV and Media class equipment upgrades.