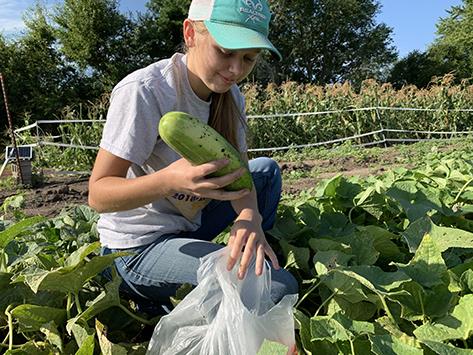 FFA vice president, senior Lily Cederstrom said she came to help pick, "Because it's fun and I like it."

COVID-19 may have put a halt to… pretty much everything… but midwest produce production can’t be stopped, and that’s one lesson Sherrard FFA students learned from Ag teacher Bill Hammes. Since harvest began in July, the students have brought in 2,306 pounds.

The garden, a living outdoor classroom in its fourth year, not quite half an acre - has never seen a harvest so plentiful, so early - and that’s even after the derecho knocked down a large section of sweetcorn Monday, Aug. 10.

“There’s a lot of people who can’t afford to buy food and this is free at the food pantry. It’s good because you know you’re helping… Not everyone can afford to plant either,” said Briar Viager, Junior, FFA President. She faithfully watered the garden every other day throughout the summer.

Bo Johnson, junior, FFA reporter said he helped out over summer whenever he could, “It’s a way to give back to our community.”

“I like being out here with the garden... The virus has made this whole year strange,” he said... “We’re still making progress even with the virus.”

The virus is one main reason Hammes and the students were compelled to keep it going.

“I know with some people who aren’t working, unemployment stopped - (There are) people who can’t really afford food right now,” said Johnson. He said he prefers a smaller school where teachers get to interact with students on a more one-on-one basis, "It feels like the teachers get to know you and talk to you  - and know how you learn. They really do care about their students and FFA kids... they get to know you," he said of Ag teachers Hammes and John Rasty.

Hammes said the kids have been able to take turns throughout summer working out in the garden - and social distancing when they harvest together, “They’re still together and building that camaraderie,” he said.

"The primary purpose," said Hammes, "helping reduce the level of food insecurity in our area - I don’t know specific students - but I know there are students that walk through our halls who don’t know where they’re next meal is coming from."