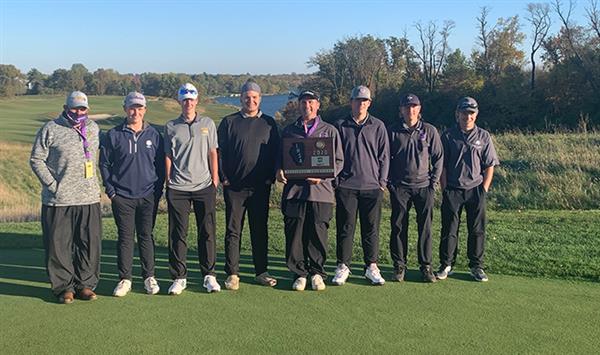 The Sherrard boys golf team won the first ever IHSA sectional championship in Sherrard history at Fyre Lake Golf Course, Oct. 12. What started out as a cold, blustery day - ended in sunshine and a record-setting win for the Tigers.

Normally, the team would go on to compete at the state-level, but that was cancelled this year by IHSA officials, due to the pandemic.

Standout Evan Earl said, “The goal is to always get to state, but it’s better than nothing.” The players are glad they got to have a season, despite the restrictions.

The top ten finishing teams were: Sherrard with an overall score of 333, Alleman and Brimfield tied for second with 359; Illini West and Lincolnwood tied for third at 366; North Mac and Williamsville tied for fourth with 371. Illini Bluffs came in at 5th place with 382; Hamilton (West Hancock) tied with Peoria Christian for 6th place with 384.

Coach Brett Williams said the day went well, “(I’m) So thankful for Fyre Lake Golf Club for being the host course, and Hy-Vee for the awesome catering job! Everything went well…  Best way to end this 2020 season!”

Upon reflection on the season, Earl said, “I played good for our last two conference meets… lows were at the beginning of the year.”

He said, “putting more thought into my practice,” is what made the difference for him.

Earl was named the Quad City Times “Illinois Pacesetter” on Sept 29 with a feature article in print and online.
In their regular season, Sherrard’s record was 14-3; post-season was 20-1, placing second at regionals, and now sectional champions.

Sherrard junior Brennan Welch said he had his personal best at the first meet of the season,  “Which was really nice. To follow that I didn’t really do what I wanted to…  now that we’re finishing off, I’m getting back to where I wanna be.”

The Tigers took the advantage playing on their home course and their hard work paid off, “We play here everyday… we know that we have to do really well - because that’s what we expect of ourselves. We know we can do really well here,” said Welch.

Four Sherrard players placed in the top 15 for individual scorers. Evan Earl, senior came in 5th with a score of 79, and Brennan Welch, junior finished overall with a score of 80 for 6th place.