Nobody gets left behind at Winola Elementary

"Family means nobody gets left behind or forgotten," according to the 2002 movie, Lilo and Stitch.

Winola Elementary put that quote into action recently - when Grant Watson, 7 year old second grader, was surprised the Friday following Halloween when his parents dressed him in his Spiderman costume early in the morning, to go for a ride. When they parked at his school, arriving before all the other students, he knew something was up. 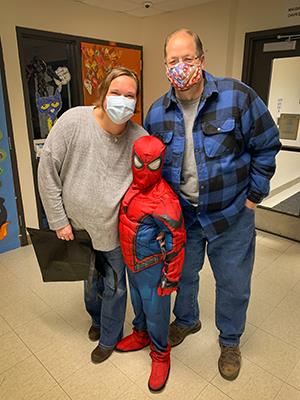 Watson had spent Halloween in the hospital. While everyone worried about Grant, he just worried about missing out.
“He was very sad he missed ‘trick or treating’. Sunday when we were in the hospital, they brought around a bag of activities, and he said, ‘This is the worst Halloween ever, this is the worst week of my life,’” said Lisa Watson, Grant’s mom. She said it was, “Very scary. To think he was very sick. I never dreamed we would end up at the University of Iowa Stead Family Children's Hospital. They were absolutely fantastic, they ruled absolutely possibly everything out and he just had an unknown virus that hasn’t been discovered yet.”
Lisa was in contact with Winola’s school nurse, Reshea Lawson, throughout his health journey. Among his symptoms, he had a low-grade fever for eight days straight when their doctor sent him to the emergency room at Trinity in Davenport - from there, Grant was sent to the University of Iowa Stead Family Children’s Hospital, the day before Halloween. Lawson, who organized the special event for Grant, knew what it felt like to miss Halloween, “When I was a little girl I missed out on trick or treating, I had my tonsils out in third grade... I spent my third grade Halloween in the hospital,” she told Grant. 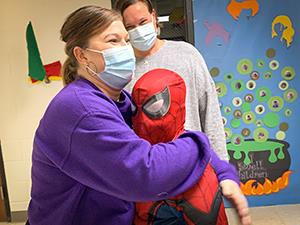 Grant embraced Lawson immediately when she gave him the news - so did Lisa. “We were all super sad you missed out on trick or treating. We wanted to give you the opportunity to go trick or treating so everybody here at Winola, all of your teachers, have little goody bags for you,” Watson told Grant. His mom, dad, Paul Watson, and grandma, JoAnn Watson, accompanied Grant on his journey around the school.
Those goody bags weren’t so little. By the end - his parents were carrying an armful of bags, including cards from his classmates, teachers and Winola staff gathered by his teacher, Stefanie Hoover. Hoover took photos of everyone with their card and sent them to Grant via Google Drive when he was still in the hospital.
“We cannot express how grateful we are to be a part of the Sherrard School District family, you guys have absolutely been incredible,” Lisa Watson told Winola Elementary staff.
Principal Kari Roberts said she’s proud of the way the Winola family has surrounded the Watson’s with support, “It goes to show what an awesome family we have here at Winola Elementary - always looking out for the students.” She said she’s not surprised Lawson came up with the idea, “Reshea has been a great addition, she puts the students first and foremost, and everyone else was just willing to jump in and help where needed.”
Following the special event, Grant said this year is now his favorite Halloween, according to Lawson. He's glad to be back to school!